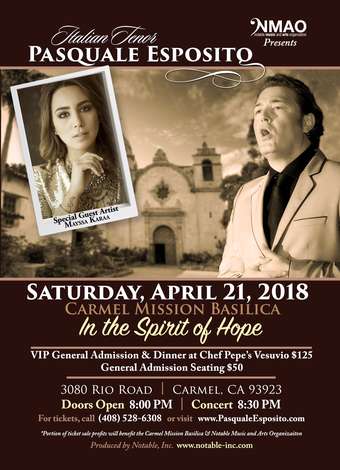 Italian Tenor, Pasquale Esposito, returns to the historic Carmel Mission Basilica for his 7th Annual Benefit Concert. The evening’s program will also include Grammy nominated Mayssa Karaa. Mayssa was featured in both of Pasquale’s TV Specials on PBS and makes her 2nd appearance at the Carmel Mission. The acoustic performance also features accomplished pianist Russell Norman and organist Davide Simi. Esposito was born in Naples, Italy and immigrated to the US in 1998. He is an international recording and touring artist. He pursued his passion for music and received a degree in Music with distinction from San Jose State University in 2009. In 2015, he released his 1st PBS Special on Enrico Caruso successfully and will release his 2nd Public TV Special in March 2018 on Italian Piazzas. In 2015, he had his critically acclaimed debut at San Francisco Opera’s premiere of Two Women.